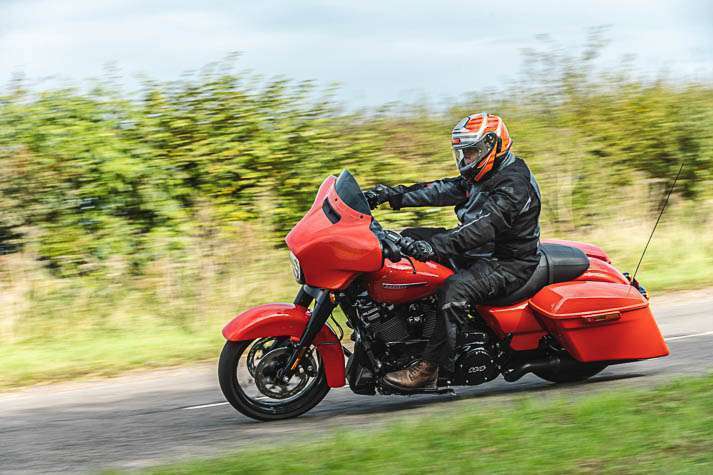 THERE IS A lot said about winter riding… or not, depending on your point of view. Barring lockdown due to Covid-19, come the end of Autumn, when the leaves have dropped, the windchill factor has increased, and those frosty mornings make you shiver as you look out at the grey sky and place that first kettle of the day on the hob, you are probably hoping the car will start.

Tucked away in the shed or garage is your beloved bike, under wraps, fuel preservative settled in the tank and trickle charger keeping the battery nicely topped up at its discharge rate so that when the time dawns when you are ready to wheel your pride and joy outside, you can set off once again, safe in the knowledge that your battery isn’t unexpectedly going to let you down.

Then there is the breed of rider that simply loves to be out and about throughout the year. That may well be for work purposes as their bike is the only mode of transport, but for others, huge pleasure is gained from ride-outs, come rain or shine, even if some of those favourite bikers’ haunts with their welcoming cups of tea and bacon butties are closed. It is all about feeling energised, about feeling alive, and that comes with not only experience, but also being conscious of wearing the right kit for the right occasion. Get it right, and you will be able to cram in many more weeks of enjoyment than you ever dreamt possible. Leather has been the go-to choice for motorcyclists as far as back as I can remember. The abrasion resistance is superb, and add to that the fact that many jackets come with removable liners which you can zip or unzip at your leisure depending on the change in temperature, makes for a suitably comfortable ride. Having said that, leather jackets and trousers can be very expensive, particularly if one targets the major brands. With that in mind, many riders veer towards textiles for their versatility, with various adjustment options across the arms, legs and waist, plus the benefit of removable layers, on offer.

Over the past few months I have swapped my leathers in favour of an outfit from Oxford Products’ Advanced Rider Wear range, namely the modular layer construction Continental jacket and trousers (I could say pants, but that’s very American!). Essentially, what we have is a three-part system of textile outer, a detachable waterproof breathable liner and a removable thermal liner. I have to say that for a combo kit that comes in at under £400, it is remarkably effective in what it sets out to achieve.. If that sounds like a surprising statement, then it is not meant to be. The only element of surprise is how much you get for the money. Motorcycling gear by and large is never cheap, but compared to other products on the market, if you are looking for four-season kit, then this is an extremely good place to start.

As a three-layer construction, what you are treated to is three jackets/layers in one. From the inside out, you start with a removable ‘Warm, Dry’ thermal liner with two inside Velcro fastening pockets. The jacket’s thermal liner has no fastenings other than those which fasten it to the waterproof liner or jacket. High in insulation and low on bulk, on only my second outing wearing the combo, this was the first piece I removed after about an hour in the saddle, so effective was it in retaining heat.

The mid, waterproof layer closes with a YKK metal zip. Both it and the thermal liner are secured by side zips and loops and press studs at the collar and cuffs. And there is no need to worry about getting the wrong ones to marry, because each are colour coded, a bit like modern tent poles.

The outer layer is not short on ventilation, with two large zipped and meshed front top opening pockets, double toggle zips at the wrists – a neat idea which means you can open from the top whilst remaining secure around the wrist – plus there are zipped openings to the upper arm and two further zipped openings in the sides of the back panel, which also provides extra storage for a map. The outer has pockets for the supplied CE Level 1 shoulder and elbow armour, and there is also a pocket for a back protector. Having worn the Continental jacket and trousers in all weathers with zips both opened and closed, I am happy to state that I have had zero experience of leakage.

As for the trousers, they come supplied with removable braces and back panel, and if you fancy complete closure, they can be can fully or partly zipped to the jacket. I like my trousers to be fairly loose fitting so the braces came as a bonus, being extremely practical. With a 31-inch inside leg, I opted for the Long version, and found them to be possibly too long for my needs whilst walking around, finding myself having to hitch them up on occasion from the front to avoid puddles and mud. Once on the bike, however, they offered plenty of protection, with the cuff being plenty wide enough to sit over boots.

The trousers boast two large thigh pockets with hook and loop secured flaps, and two zipped closure hip pockets, all lined with a silky fabric. For ventilation, it is a simple question of unzipping the sides of the thigh pockets and opening a hook and loop fastening to the bottom of the pocket. Rather neatly, the pocket then folds diagonally and is secured in place via a press stud. What lies underneath is a large panel of mesh which allows ventilation to circulate around the thigh and groin areas. Protection is via adjustable three-position CE Level 1 knee armour, with pockets for hip armour. The trousers fasten with a hook and two press stud, and the braces and back bib can be removed easily via a rear zip and Velcro tabs. YKK zippers secure the ankles and there is also a hook and loop flap to cover the zipper.

It is easy to become confused by terminology, particularly when talking about a laminated jacket and a three-layer construction jacket. In essence, a waterproof membrane on a three-layer construction jacket will stop water from seeping through to the body, as the material’s pores are too finite to allow the ingress of water molecules. The membrane is the middle layer of the jacket, sitting between the outer layer and the inner insulated or mesh layer, and therefore has not been bonded to the outer material. By comparison, a laminated jacket is where the waterproof membrane has been laminated to the inside of the outer material. In this case, to make it 100 per cent waterproof, all seams have to be sealed. Also, you will no doubt have seen water droplets beading on an outer jacket. In this case the outer has been treated with a durable water repellant coating (DWR) finish, commonly found on motorcycle jackets as it will repel short shower bursts as opposed to a torrential downpour, the latter causing the fabric to wet out. That’s when you find it becomes heavy and less breathable. There is inevitably going to be a chill factor involved once a jacket and/or trousers have wetted out, As an outdoors writer and product reviewer of many years’ standing, I have found that after a wet day on the hill, giving a laminated jacket a good old shake will help expel much of the water droplets. A three-layer constructed jacket is going to take a lot longer to dry, as the outer layer will be soaked through.

That might all sound negative, but in truth both laminated and layered textile jackets work extremely well, with the latter allowing through both air and moisture, and the laminate system keeping any water outermost. There are no rights or wrongs, just personal preference, bearing in mind the weather conditions you expect to be riding in.

I am looking forward to making further use of the befenits of the Continental system, but before I finish, just let me mention an incident I faced which could had led to more dramatic a conclusion. I was wearing the Continental outfit when I was involved in a serious RTC with a van on a notorious, blind, left-hand bend, resulting in the road being blocked for four-and-a-half-hours. (Just to clarify, I was not riding the Harley shown in the images!) I was somersaulted through the air and landed heavily on the Tarmac, rolling a few times before coming to a stop on my back. I ended up suffering severe bruising to both legs, a busted wrist and dislocated thumb as one of my gloves had been ripped off at some stage. I honestly believe the Continental outfit had proved a Godsend, both jacket and trousers remaining in place, with hardly a mark on them. However, that did not deter a paramedic from cutting the jacket into shreds to check for serious injury, as well as slicing through the braces. Upon later examining the jacket in hospital, the armour protection was still securely in place. My Shoei helmet, which I also had on test, had to be replaced due to a cracked visor and various scratches. The helmet manufacturer, like Oxford Products, very kindly replaced the gear so I could enjoy further days in the saddle. So, lesson learnt. Wear the right gear, for you never know what lies around the next corner.

Wear the right gear, for you never know what lies around the next corner. 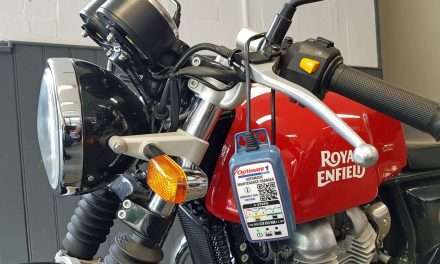 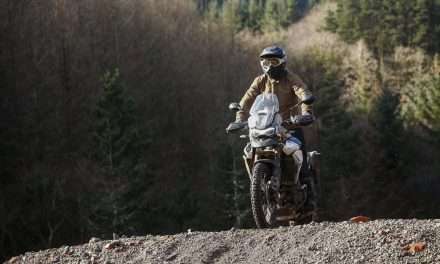 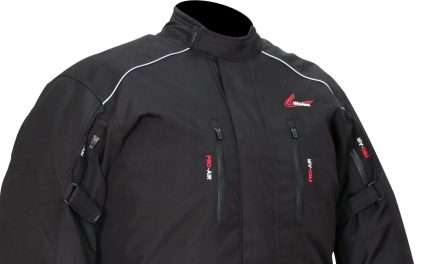 Weise Core Plus, big on quality, small on price 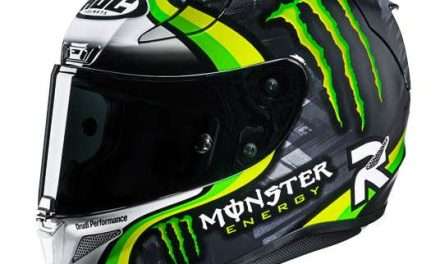