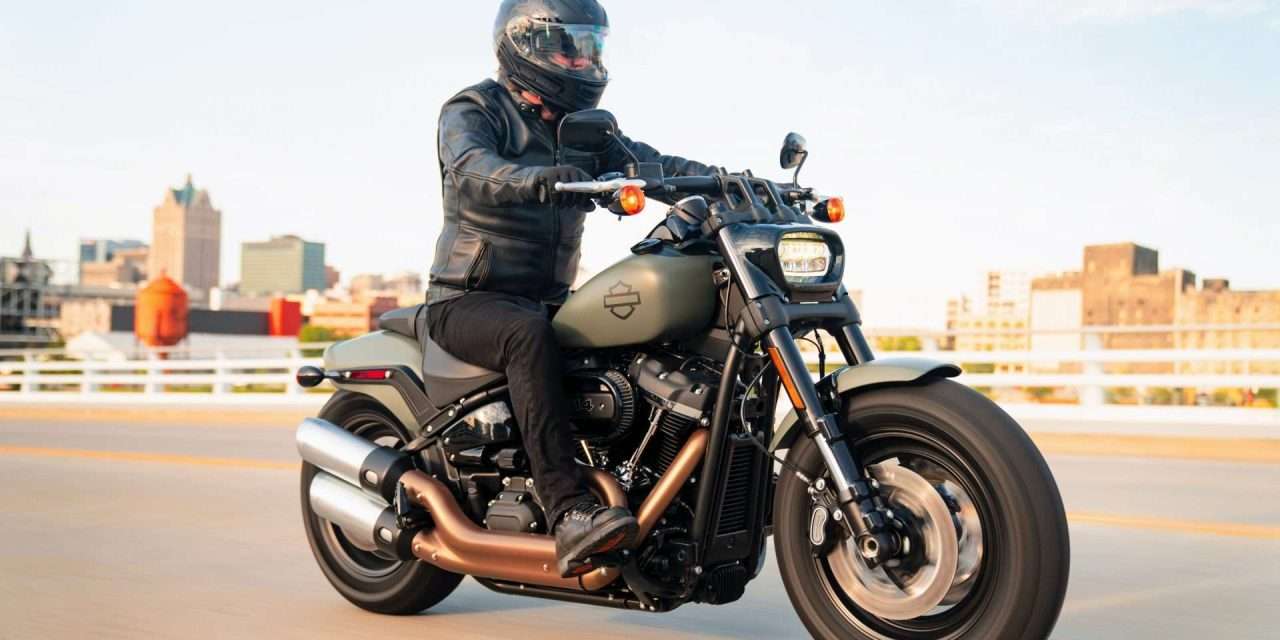 “That bike looks like it was custom made for you, it fits you so well,” commented my IAM assessor. You know what? I couldn’t argue with that.

I had felt the synchronicity from day one. But then this wasn’t a weirdly meaningful coincidence, as I had previously arranged for the Fat Bob 114 to be delivered on a certain day for a week of riding, and yet it was to prove an experience that seemed far too significant to be a mere serendipitous encounter. It was as if I had been delivered a soul mate off the back of a delivery truck.

If all that sounds a bit random, it’s not meant to be. Because what we have here is Harley-Davidson’s star attraction from the new line-up that premiered back in 2017, the Fat Bob having metamorphosed from Dyna to Softail badge with its updated chassis geometry, prompting it to become an instant hit.

The original air-cooled v2, four-stroke Dyna Fat Bob custom cruiser had been first introduced in 2008 and was to run until 2017. With a displacement of 1690cc, it boasted a maximum torque of 95.89ft-lb (130Nm) at 3500rpm, with a claimed 78.32hp (58.4Kw) at 5020rpm. Traditionally the Dyna series, which also included the Super Glide, Super Glide Custom, Street Bob and Low Rider, used lower capacity twins and a rubber-mounted engine to isolate vibration.

Last year I experienced a week with Fat Bob’s cousin, the Fat Boy. Both muscle machines utilise the same Milwaukee-Eight 114 powertrain, which sits in the middle of the current Big Twin range between the base Mil-8 107 and the top drawer 117 engine from the CVO line-up. 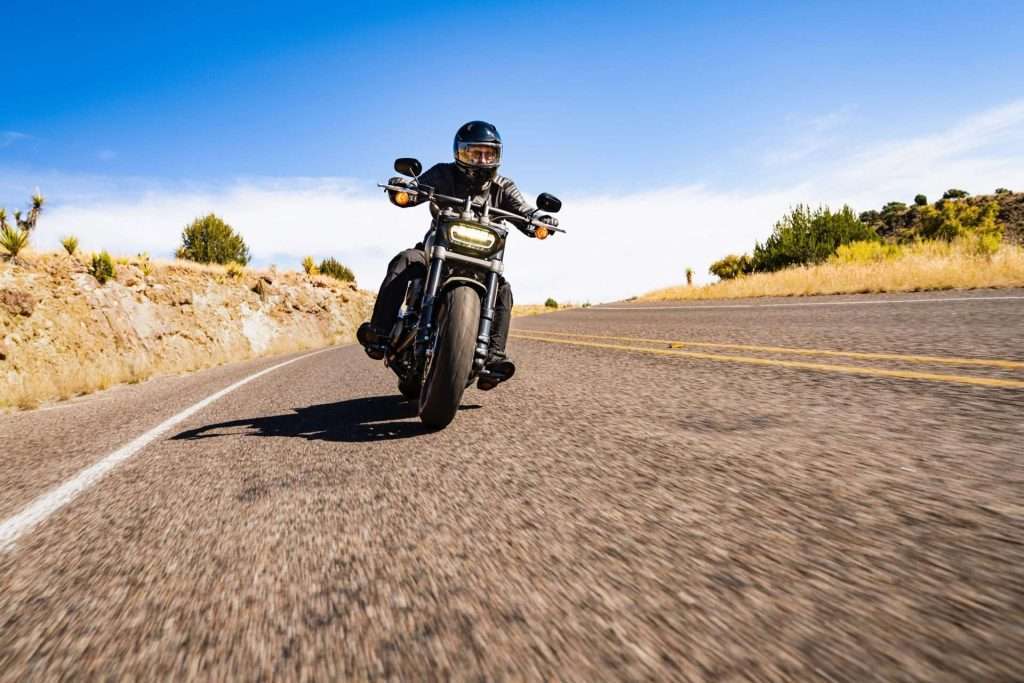 The Fat Bob offers a more aggressive riding position and dynamic ride, with better lean angles due to the greater clearance levels. It is also perfectly comfortable as a relaxed cruiser. Yup, it’s a bad-ass bike that’s all about nutty performance, and one which rides like a dream. We don’t have canyons to carve in my part of the East Midlands, but what we do have are plenty of twisties alongside smooth, open roads, plus those annoying and alarming sections of bitumen riddled with pot-holes, but the Fat Bob takes most in its stride, thanks to the inverted race-style front forks, plus adjustable preload at the rear.

The bike sits on some chunky rubber, 150 up front and 180 on the rear which, upon first noting them, you might jump to the conclusion that handling would be affected, but you would be wrong. The bike is perfectly balanced and not once did I feel uncomfortable or nervous. With its forward controls and dirt bike style drag bars, it’s incredibly nice to sit astride and ride. Almost perfect. Almost flawless. Because nothing is ever one hundred per cent. But then there are no deal breakers to mention either. 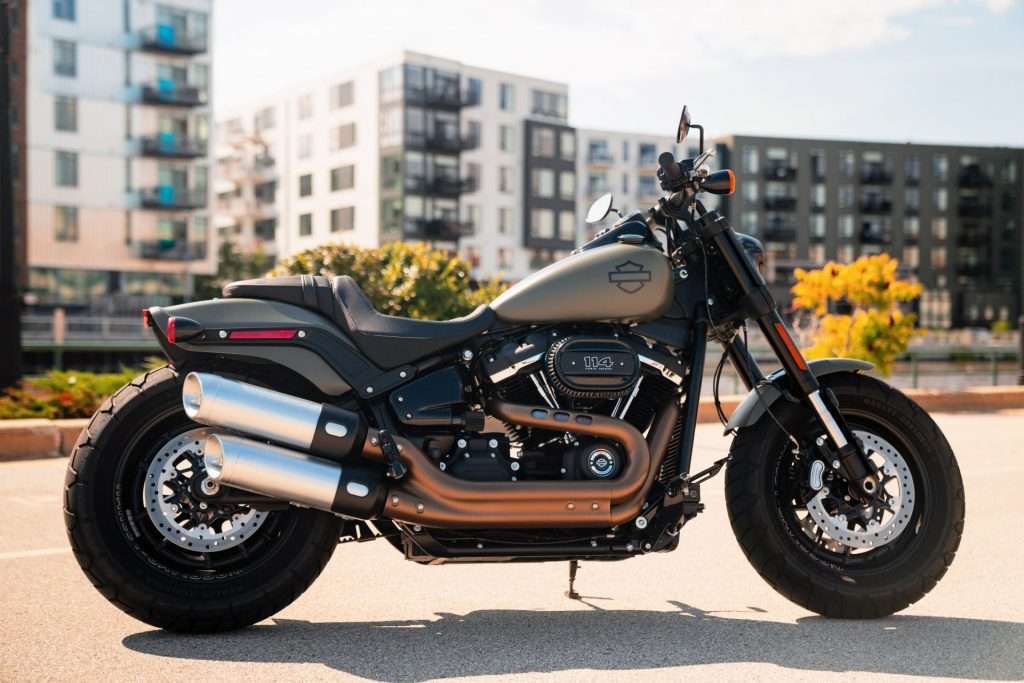 It is difficult to express how much this grin-inducing bike fits my riding style. It inspires confidence, being easy to hold a line with the new tyres, and delivery from the power plant is hugely impressive with torque right off the bottom. No matter what revs you are at, acceleration is available right through. The Fat Bob also is really well balanced at low speed, and in town in heavy traffic, when lane splitting, those drag bars in no way impede progress. Out on the open road, it is simply a case of leaning the body and the bike does the rest for you. Even with zero windscreen I noticed no buffeting when cruising between 55 and 60mph. And whilst engine braking will take care of most situations, the rear does not have a lot of bite, although it does the job adequately enough.

Although there is no vibration to speak of, the Fat Bob 114 does a great job of shaking up the status quo with its wonderful fit, finish and quality feel. Equipped with a 6-speed gearbox and putting down that claimed 119ft-lb of torque at just 3,000rpm, the soundtrack is completed with a newly chromed 2-into-2 offset shotgun exhaust. 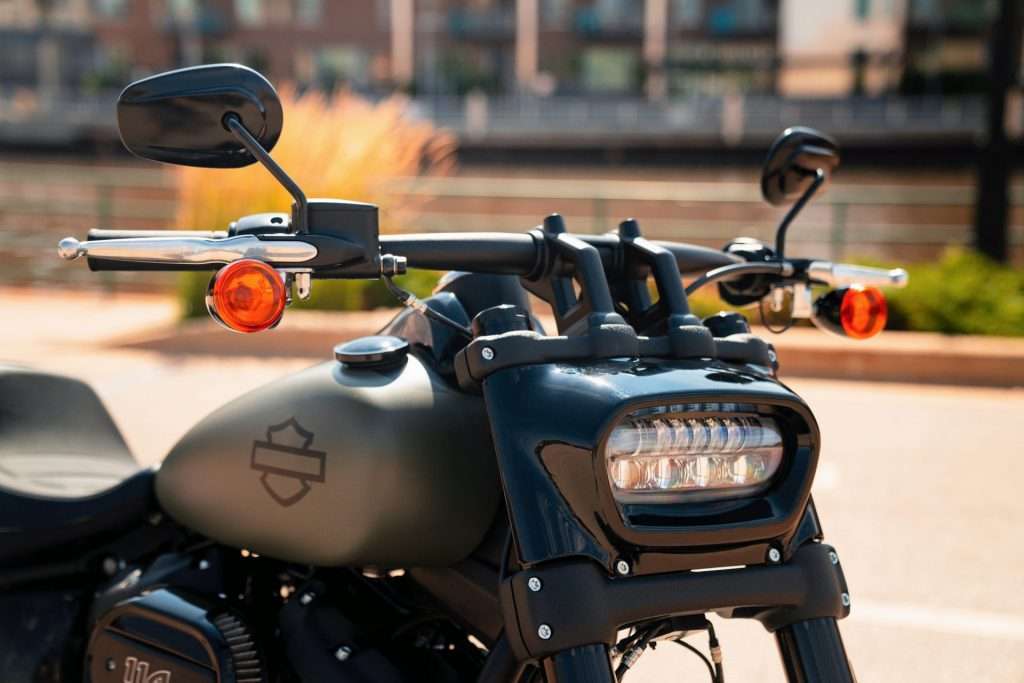 From the front end, the attention-grabber is the cyclops-styled LED headlight. Those lights are clearly visible to oncoming traffic, adding to the safety factor.

Built with muscular power and the delivery to match, this is authentic heritage meeting modern technology; a street-eater with a hunger for the open road, that total of 119ft-lb of torque always on stand-by, ready to deliver.

Whilst many modern bikes are tech heavy, with the Fat Bob you get all the relevant information with nothing extra to throw you, so you can simply enjoy the ride. 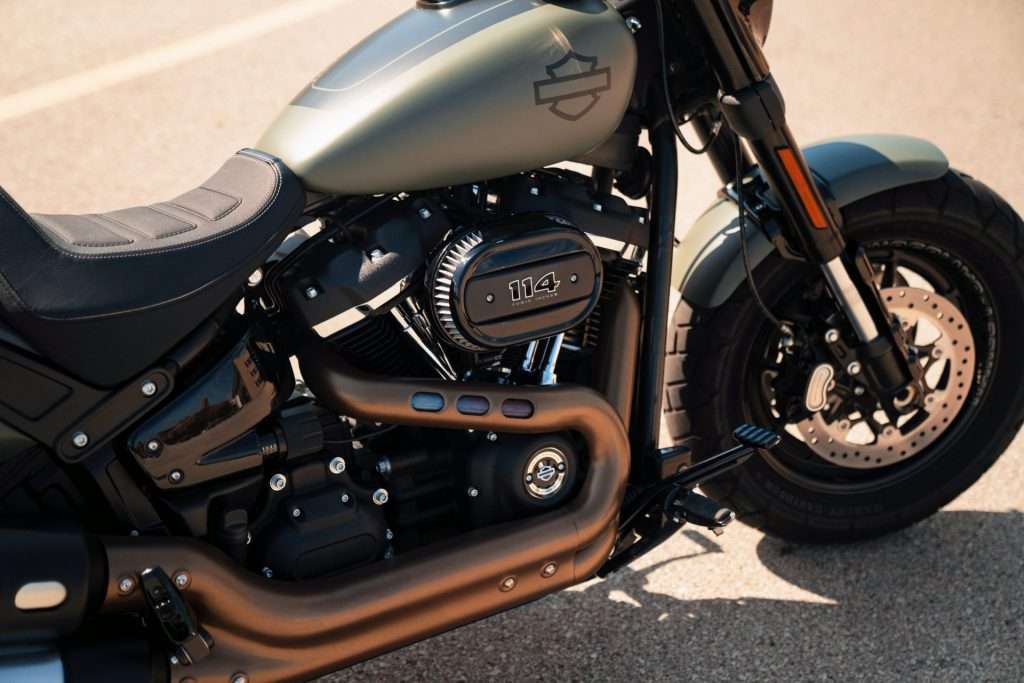 I admit to having an ongoing love-love relationship with Harley-Davidson. Last year I had chance to ride the Iron 1200, Street Glide, Fat Boy and Low Rider S. Out of the four, the only one that didn’t grab me in the same way as the others was the Iron 1200, which I found had too much vibration even at low speeds, and was cumbersome to manoeuvre at roundabouts. The others had excellent composure and balance, as does the Fat Bob. Even at a hefty 306kg, it’s like a heavyweight boxer dancing around the ring on tiptoe. It has no right to be so agile, but then it likes to fly in the face of conformity.

For a cruiser it has a wonderful, all-day comfortable seat, and yet it gives two fingers to any passenger who wants a ride. One look at the available area behind the rider and they are better off walking. As for the cockpit, there is no messing with rider modes. The ABS, a Godsend on any bike, is always on, the tank-mounted speedo is difficult to read at speed, yet the view upfront and stance through the hefty handlebar makes you feel like a pumped-up powerlifter. Yep, I’m tough, and so is my bruiser of a bike. Yet… yet, under all that supposed aggression is a pussy cat waiting to be fawned over. 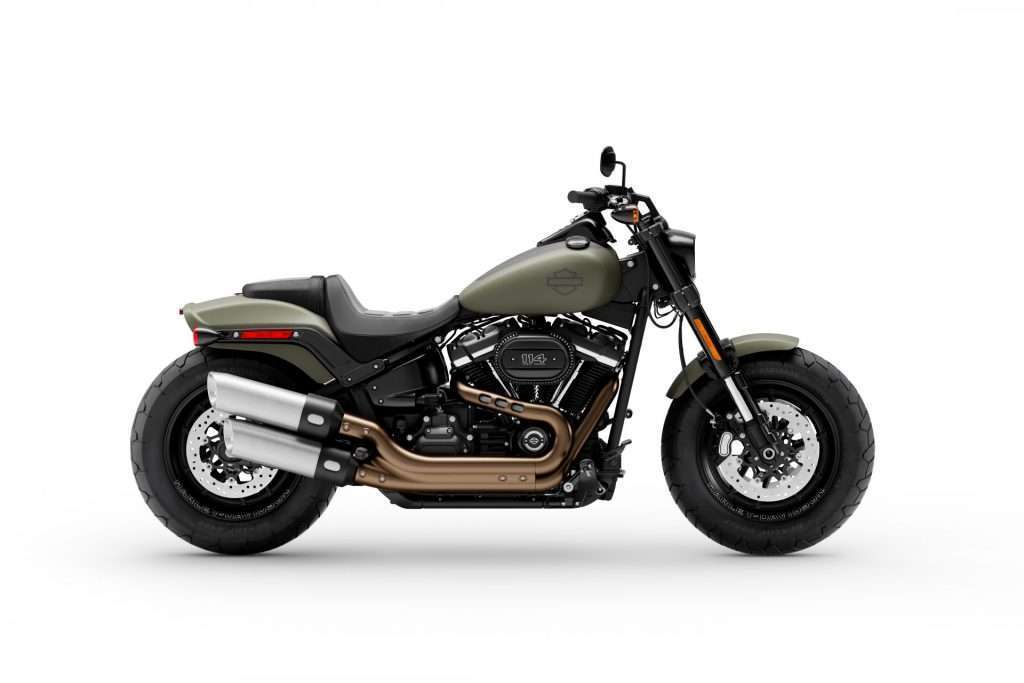 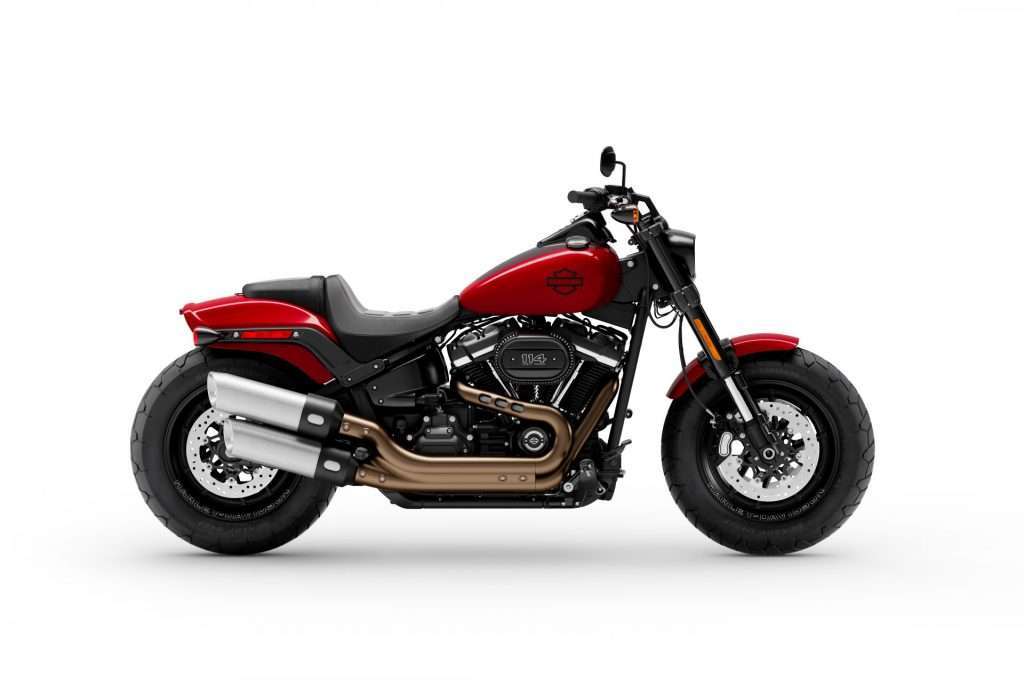 I mentioned earlier about nothing in this world being perfect. Well, the Fat Bob 114 pretty much is. But… as I sat outside a friend’s house after a longish ride, engine off, I noticed how warm my right leg was getting from a significant amount of heat coming off the exhaust, which would be welcome on a cold day. But then I was sat with my leg leaning against the pipes, so that wasn’t really Fat Bob’s fault.

Anything else of note? Nope. Oh, just the price, at just shy of £17,000, it kind of makes me want to weep. Why are Harleys so damned expensive? Even second-hand? The bike currently remains out of reach, but never out of mind. If I sold my soul to Him downstairs, I would be able to acquire myself a demon of a bike; an attention-grabber without doubt, but then, having already sold my soul to the devil, I would have to ask Him kindly to fuel the Fat Bob up for me pre-delivery, because the money pit would be, well, well and truly dry. Damn Harley for making my heart ache. 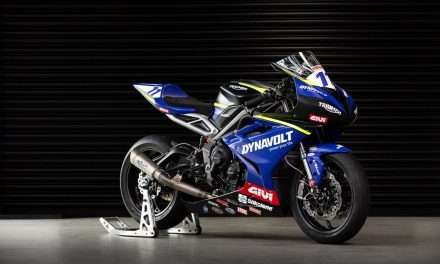 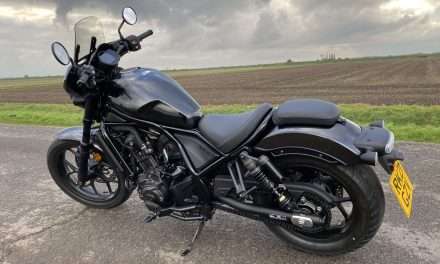 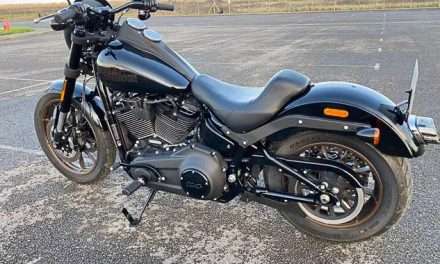 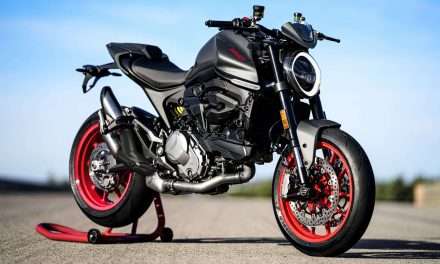