ROYAL ENFIELD UK and suicide prevention charity, CALM, are joining forces to help more motorcyclists get the help they need to protect their mental health and promote new conversations amongst friends, family and colleagues.

The one-year partnership will see Royal Enfield back CALM’s crucial work in providing frontline support for those facing crisis point or feeling like they need to talk about life’s problems with a dynamic new campaign, ’Open It Up’. Suicide is the single biggest killer of men under 45 in the UK, and the cause of 18 deaths every day. CALM was founded to tackle this issue and since its launch in 2006, has helped millions of men, and their friends and families, to change their lives for the better.

As mental health continues to be under the spotlight, the campaign ‘Open it Up’ will incorporate all manner of activities nationwide from fundraising initiatives to raising awareness of mental health issues. Royal Enfield will leverage its nationwide network of dealerships and community to instigate a programme that will deliver both practical support as well as spreading awareness of CALM’s support services throughout RE’s sales and marketing campaigns. 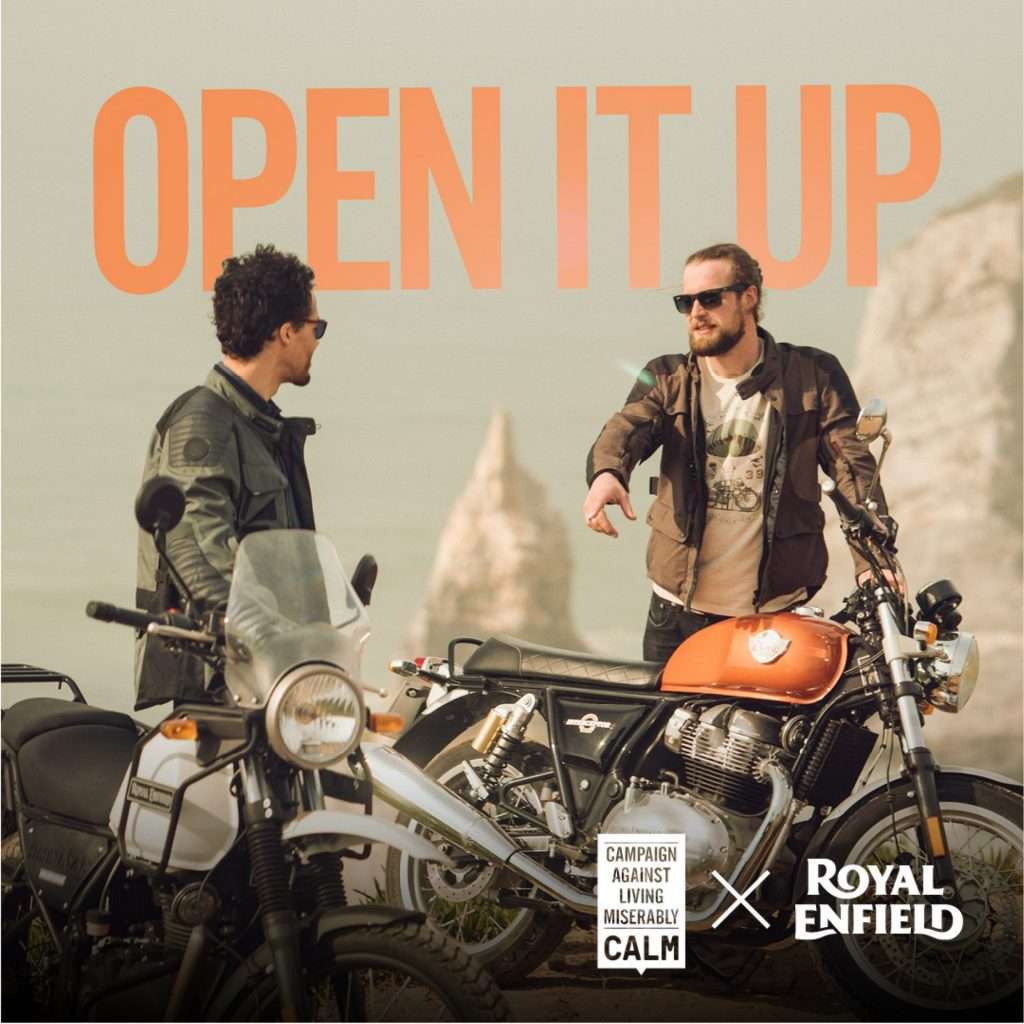 The partnership will help CALM connect with Royal Enfield’s biking community, especially amongst middle-aged men who are one of the most at-risk age groups of suicide, and who may feel unable to talk about the mental health problems that all may face at some point in their lives. With biking having a predominantly male audience, Royal Enfield’s ‘Open it Up’ campaign will look to open conversations, encourage people to look out for each other, and help normalise what to some people might feel like tricky conversations about mental health.

George Cheeseman, Country Manager UK – Royal Enfield, told Bikers Nod: “We are so pleased to be able to provide support for CALM – the issues around mental health have never been more critical both to discuss and to action. We are always talking about the mental freedom that biking affords – it’s no secret that a major part of the appeal is going for a ride on an amazing machine in beautiful surroundings – a wonderful way to clear your head. We are really excited about all the possibilities ahead of the ‘Open it Up’ campaign for raising funds and awareness for CALM, and we are lucky enough to have an incredible community to tap into who is both relevant and engaged.”

Speaking on the partnership, Simon Gunning, CEO, CALM, said: “We are always looking for new ways to encourage behavioural change and tackle the stigma that prevents people talking about mental health. Going out on your motorbike, getting together and connecting with motorcycle enthusiasts is a great and simple way of doing that – people are relaxed and in a familiar environment so they’re more likely to open-up. Our partnership with Royal Enfield allows us to do just that. By opening the door to thousands more people, and in particular those who are in the most at-risk age groups, we can continue to play an important role in challenging the stigma surrounding mental health and suicide, taking another step forward in creating long-term cultural change.”