When first asked if I might like to try out a Fat Boy, I was somewhat perplexed. Was I being confused, erroneously I hasten to add, with someone hiding a secret, sordid past once carried out in a city’s sleazy back streets… and then the penny dropped. Oh, THAT Fat Boy, the V-twin Softail cruiser; the original fat custom icon boasting a massive presence and a dominant attitude.

But we are in no West Coast setting, where hot, sultry days flow through a narrative of sweat, blood and tears; where some B-movie character, seated on his pristine Harley, parks up and waves a bundle of cash as he spies through an open window a beautiful femme fatale sporting horn-rimmed glasses. A cigarette dangles from the side of her lip-glossed mouth, feet in high heels on the desk whilst she files already perfectly manicured nails. She gives him and the money a cursory glance, and then becomes transfixed by the bike. One fantasy after another… Harleys do that to you. But no, so sorry to break the spell, but back to reality. We are in downtown Heighington, an attractive village three miles east of the cathedral city of Lincoln.

Harley-Davidson owners will no doubt recall, but for those of you not yet in the loop, a little over 30 years ago designers Willie G. Davidson and Louie Netz put pen to paper, their creation resulting in H-D building a prototype Fat Boy in Milwaukee for the Daytona Bike Week rally at Daytona Beach. It proved to be a real head-turner.

Wind forward all those lost years, and a delivery vehicle drops by my home, the rear doors swing open, and I am greeted with an extremely plump rear end. Without a second glance I could tell immediately that this particular Fat Boy had grown up. I was staring at a bike for the big boys and girls. I cannot repeat what first crossed my mind, but it went along the lines of, ‘S**t, that’s big’. This was going to offer some ride. I’m no slouch at 6ft and 15 stone, but would I be able to manouevre it when I flipped the side stand up? Would it be like wrestling a crocodile! The pulse was racing, the nerves a-jangling. And then it rolled down the ramp and stood in all its glory, sitting on 240mm rear and 160mm front rubber surrounding stunning solid-cast disc wheels, the bike sparkling in the sunshine with its satin chrome finishes and striking burst orange tank. I didn’t know it at the time, but this Fat Boy with its hugely impressive Milwaukee-Eight 114 engine was 30 pounds lighter than the previous generation, even though to me it looked like a steamroller and could undoubtedly squash anything that jumped out in its path. Firing her up for the first time, the engine sounded smooth and powerful. Not the earth-shattering rumble I had been expecting, but rather a softer, more mellifluous tone to satify the soul. I could not wait to get her on the road and start turning heads, because I just knew that that was going to happen. And it did. I felt and heard the reassuring clunk as she dropped into first gear, and having applied the slightest twist of the throttle, immediately I felt the low torque kick in. As I was leaving my driveway a couple across the road stopped and stared, making me edgy in case I stalled it. But I didn’t, and we all smiled. They could tell I was grinning, because for the first time in my life I was wearing an open face helmet, purchased especially for the occasion, complete with a darkened drop-down sun visor. If I was going to ride this Harley, then at least I wanted to look the part.

As I headed out of the village on this particular warm, balmy evening, the sun was slowly setting on the horizon; the breeze was gentle, even uplifting. I found myself settling easily into a meander through the countryside, simply because I was going about my ride aimlessly with no destination in mind. I felt the occasional insect ping off my cheek. Then suddenly I saw it ahead – a large sprinkler irrigation system in a crop field, close to the road, spraying water across the Tarmac. Fat Boy and I got a faceful, but we didn’t care. Hell, this is life on the road, particularly across Lincolnshire’s rolling pasturelands. I was too relaxed to mutter even the simplest of expletives from my armchair seat with feet forward and planted comfortably on floorboards. I could have journeyed on and on if the five-gallon tank had been fully loaded, but it was time to spin round and head homeward at the same leisurely pace, again raising smiles as I passed through small villages. I felt like a king with my grown-up Fat Boy playing to the crowds. 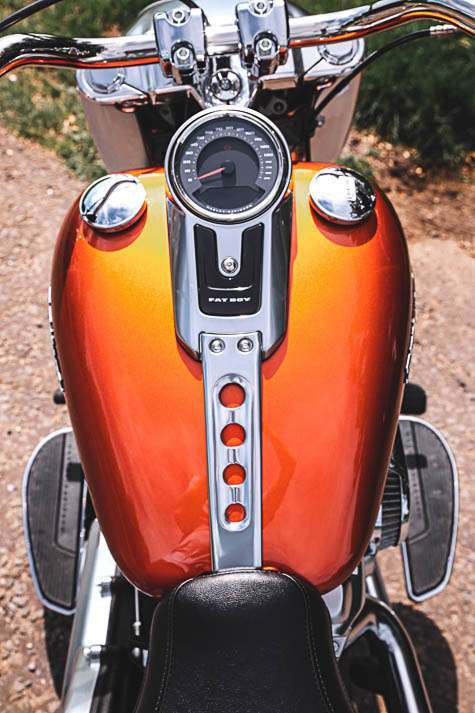 Without doubt this iconic muscle-cum-cruiser-cum-drag bike has been a favourite amongst H-D riders. Possibly not the best, but certainly holding its own in the top three. The aesthetics are bang on for the Softail line-up, particularly with that Milwaukee-Eight 114 wedged into the chassis. I am not going to gloss over the aesthetics, because the machine-cast aluminium wheels are without doubt a signature trait, alongside the highly distinguishable freight train style headlight. Then there is the bronze-coloured tank and mudguards contrasting with the striking satin chrome finish and the dulled-out chrome on parts such as the rocker box covers and exhaust heat shield, a finish you won’t find on any other Harley.

An easily accessible adjustable knob alters the preload, and a circular console showing an analogue speedometer is mounted centre of the tank, flanked by the filler cap to the right and mirrored on the left with a false cap to balance the aesthetic.

Housed in the console is a digital odometer, trip meter and gear/rpm readout. The simplistic riser handlebars have been internally wired to enhance the front-end clean lines. Brake-wise, you are treated to four piston calipers at the front and two pistons at the rear.

Ride it and you know immediately you are on a Harley, because it loves straight lines. The DNA is still apparent, with little lean angle to speak of, and whilst you have to muscle it round corners, that’s all part of the experience as you feel the power and soak up the

coolness of this machine. The term ‘Marmite’ has been somewhat overused, but it does apply to the Fat Boy. Traditionalists might see it as being a tad too futuristic for their liking, but to someone like myself, relatively new to the brand, I can only wax lyrical about its looks and ride. Those Harley designers have managed to stick to the overall lines of the Fat Boy, and yet come up with a strikingly mean and modern stance.

Having enjoyed a pleasant countryside ramble, next up was a ride through town, and again its character shone through. Whereby the sophisticated suspension was evident on country roads, in town I had to use the brakes a lot more, and not a great amount of pressure was required for them to bite and pull me up smoothly. I also noted how little front end dive there was. Those fat tyres spread a collosal amount of rubber on the road, so much so that I was treated to an amazingly precise, point and shoot ride, the ‘plump one’ raising a sneer at any sections of road that may have fallen into disrepair.

If you want to feel planted in the turns, then tickle the back brake and lay off the front, otherwise you may find yourself praying to God for your lack of discipline. Treat it right, and it will look after you. Just remember who’s in charge here. That’s right. It ain’t you.

Hanging on to the upright, wide bars, I morphed into a sail as I wound on the power. Smaller, slimmer riders than I might want to think about a gym ticket before muscling their way around the corners at speed, because those Fat Boy eyes remain transfixed on any straight road and she doesn’t like to be provoked. If that does not suit your modus operandii, then I suggest you look elsewhere. Otherwise, dive deep in your pockets or go hustle the bank of mum and dad.

I cannot overstate how much charm and charisma the Fat Boy has. It is almost as if Harley-Davidson has had a beefcake blueprint stashed away for decades in a dusty design room drawer, and thought that now was the appropriate time to reveal their creation to the world. In light of that, there are indeed plenty of compelling reasons to want to buy one of these impeccably detailed machines. Classic meets futurism, eh. Do I want one? Hell yes.